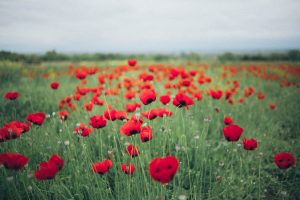 Many of us wear poppies to honor of America’s war dead on Memorial Day. This practice was inspired by the poem “In Flanders Fields,” written in 1915 by Canadian soldier John McCrae.

The spring of 1915 was the first time that warm weather began to warm up the countryside after the cold winter at war in 1914-1915. One of the plants that began to grow in clusters on and around the battle zones was the red field or corn poppy (papaver rhoeas).

The field poppy is an annual plant which flowers each year between about May and August. The wind disseminates the seeds, which can lie dormant in the ground for many years. Seeds often germinate and the poppy flowers grow if the ground is disturbed in early spring. This is what happened in parts of the front lines in Belgium and France. After the fighting disturbed the ground, the  poppy seeds germinated and grew during the warm weather.

In May 1915 the sight of these delicate, vibrant red flowers growing on the shattered ground caught the attention of a Canadian soldier by the name of Major John McCrae. He noticed how they had sprung up in the disturbed ground of the burials around the artillery position he was in. They inspired his poem “In Flanders Fields.” The first verse of the poem has become five of the most famous lines written in relation to the First World War:

In Flanders fields the poppies blow
Between the crosses, row on row,
That mark our place; and in the sky
The larks, still bravely singing, fly
Scarce heard amid the guns below.

We are the Dead. Short days ago
We lived, felt dawn, saw sunset glow,
Loved and were loved, and now we lie
In Flanders fields.

Take up our quarrel with the foe:
To you from failing hands we throw
The torch; be yours to hold it high.
If ye break faith with us who die
We shall not sleep, though poppies grow
In Flanders fields.

This Memorial Day, we will wear poppies to remember all those who died in all wars and actions to defend our freedoms.

Welcome to Living with Flair, the official blog of Flair Cleaners. New to our blog? In a nutshell, we are Southern California’s leading eco-friendly dry cleaning business and we’re passionate about clothing, our community, and our environment. END_OF_DOCUMENT_TOKEN_TO_BE_REPLACED