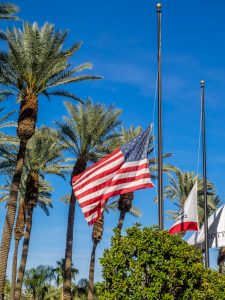 Many of us pause on Memorial Day to remember heroes who died serving our country. And, until noon, we fly our flag at half-staff. But, it’s not as simple as that. Here are seven things to know about proper flag etiquette on Memorial Day, and how to show respect as the colors are presented in local ceremonies.

From the Detroit Free Press:

Make sure the flag is in pristine condition and isn’t tattered and torn, and that its red and white bars and the union (the blue field of stars) are bright and vibrant. If yours is dingy, bring it to Flair Cleaners. We clean US flags for free all year long.

If the flag is no longer suitable for display, dispose of it properly, preferably in a ceremonial burning. American Legion posts and other veteran groups often have flag-disposal ceremonies.

From all of us at Flair, Happy Memorial Day and thank you to the heroes who gave their all, and to their families who still miss them.

Welcome to Living with Flair, the official blog of Flair Cleaners. New to our blog? In a nutshell, we are Southern California’s leading eco-friendly dry cleaning business and we’re passionate about clothing, our community, and our environment. END_OF_DOCUMENT_TOKEN_TO_BE_REPLACED